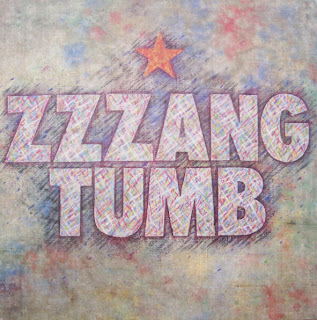 A record for your summer parties. We all know where the phrase zzang tumb comes from, but the band formed in the early eighties by Latte Kronlund, in stockholm, who played around in a studio with a drum machine and funky rythms from his bass. from this lineup a whole band soon emerged with among others iodine jupiter from porno pop moon family, soon to be in kitchen and the plastic spoons, sisters idde and irma schultz and a bunch of other people. they developed lattes ideas about a funky new wave band and grew very tight as a performing entity, so on this record, they play great funky wave with loads of slap bass and rhythm. somewhere on the road they managed to get hold of siouxsie and the banshees guitarist john mcgeoch and made him come and produce the album. included here as a bonus track is the b-side for their second single, a cover of bowies andy warhol.
VEM HAR LAGT RYTMEN I EN BOX?
Upplagd av Albin kl. lördag, maj 31, 2008 43 kommentarer:

Dont know much about this band either. they were from or around gothenburg and released this single and a lp on radium, both displaying excellent gothic post-punk with lots of weird touches and beefhart-esque rythmpatterns. the a-side on this is fantastic with its melodic clarinet parts and powerful backing vocals. ill post the lp as soon as my stereo is ok again.
HOO HOO HA HA
Upplagd av Albin kl. tisdag, maj 20, 2008 29 kommentarer: 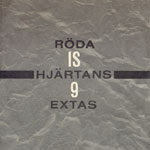 Great first single by gothenburg band IS9. after this they released one lp and the single i posted a while back. smart arrangements and a slight nod to gang of four or echo and the bunnymen. released by vinylbolaget, a label from borås i think, that also released their other albums and some other stuff that arent worth to mention. get it.
RED HEARTS EXTACY
Upplagd av Albin kl. måndag, maj 19, 2008 6 kommentarer: 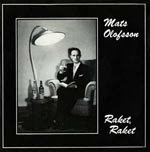 Second release from mats olofsson. not as essential as the first but still some good minimal moments. i think the best part of this is the perfect front cover. he also released a cassette which i dont have, entitled "kulturen är död". it would be great to hear it so if anyone is willing to contribute it would be very appreciated.
ROCKET, ROCKET
Upplagd av Albin kl. onsdag, maj 07, 2008 1 kommentar: 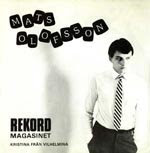 A deep breath... wow. this is THE minimal synth single from sweden. mats olofsson started out as drummer for then punkband docent död, but left after their second single to pursue a solo career. in 1981 he released two brilliantly poppy synthsingles and one cassette (if anyone have that, please share!). rekordmagasinet were a magazine directed to pre-teenage boys published in the 40s and 50s in sweden dealing with sports, football, hockey etc. 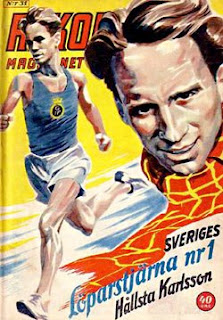 mr olofsson really captured the feel of 50's style schlager pop on both these wonderful tracks. the b side is a cover of swedish "dansband" Sven-ingvars great hit but he turns them into smart, synthpop that should have got more recognition in those days. i believe the commercial success didnt really catch up with his output. nevertheless this single should be selling on ebay for insane sums, but it dont and that is a mystery to me.
TOSSTEN TEGNER
Upplagd av Albin kl. tisdag, maj 06, 2008 2 kommentarer: 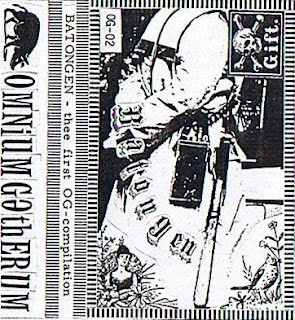 Excellent compilation from small swedish industrial label omnium gatherum, who released at least three cassettes in the late eighties (sadly just recently gone out of print). this is "thee" first tape in the series, displaying what went on in the very interesting swedish industrial scene in the mid-late eighties. skuggan rukar gives us three fantastic minimal synth-tunes, apparently compiled from some of the rare tapes they released on their own. i dont know much about the band, though, but i think one of the two members later joined swedish industrial pioneers en halvkokt i folie and nowadays works with various swedish comic books. he said that there were plans to release a vinyl edition of their cassettes, so stay tuned for more info on that. among the other artists we find arvid tuba, famous industrial/synth-pop/drummachine-poet, who released a lot of tapes of his works which i havent heard. bilaffären does two tracks of silly, but charming punk-synth bits with loads of humor. they also released at least one cassette which ill be getting in the mail soon. no surprise in seeing halvkokt i folie on this sort of compilation but they display their usual silly cut-up humor. but the real weird thing about this is that swiss band young gods is included with two tracks from their early period. i wonder why they were included in a swedish industrial compilation. still, the songs are really good and just dont miss this.
BATONGEN
Upplagd av Albin kl. söndag, maj 04, 2008 4 kommentarer: 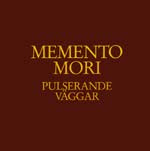 After MM was credited as best band of 83 in swedish rockmagazine Schlager (swedens NME?) pseudo-big record label MNW approached them and wanted to release their records, resulting on this co-production with Mementos own Pippaluck label. Here we can hear their transgression into a more rhytmic form of post-punk retaining all the angst from their first album. this is their second single, the first one just included two tracks from the first album. i just discovered a funny thing, the first lines in pulserande väggar is a translation of talking heads memories cant wait. tom holmlund also nicked some lines from birthday party on the first lp.
PULSATING WALLS
Upplagd av Albin kl. lördag, maj 03, 2008 Inga kommentarer: 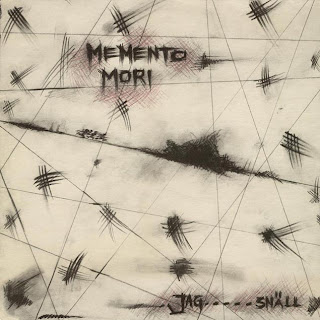 Memento Mori started out as Tom Trick in eskilstuna playing quite standard punk, after this they took the direction of most smart punkbands and evolved into a very nice post-punkband influenced by talking heads etc. with a more funky approach to depression and teenage angst. tom holmlunds lyrics deal with search for approval as a young man and capture the feeling quite well, at least thats what i felt in my teenage years. this is the first album, released on their own Pippaluck-label, recorded in mistlurs newly built studio in stockholm. they got a lot of praise in those days, and mostly for their live shows as they were a tight, funky band later to have sax and a lot of rythminstruments on stage and on their next record. from what ive heard they sounded great live (live cassette-split with camouflage coming soon). as for this album i think its their best work, with hard punky bits still intact and of course their lyrical abilities. the last track is a music adaption of a poem by famous poetess edit södergran. great stuff!
apparently the band newly reformed, plays live occasionally and plan to release a kind of best-of cd soon. check their myspace HERE.
JAG... ...SNÄLL
Upplagd av Albin kl. torsdag, maj 01, 2008 1 kommentar: