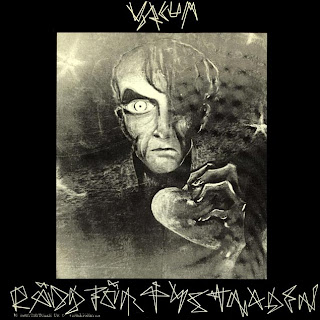 "In 1977 Stephan Segermark and Mats Hammerman became classmates in the first year of high school. The had been childhood friends and found each other at once. The dinosaurs and Airfix models in scale 1:72 was now replaced by music by bands like The Saints, Wire and Sham 69. It did not take long before they started talking about forming a band. In 1978 the formed The Blank Generation which tried to rehearse three times but the drummer never showed up as he was more interested in driving his moped. The only thing they ever did was a badge.

Then they heard or a female drummer, which Nicke Hasselberg had played with in his first punk band, and Stephan and Mats called her at once.

The first rehearsal with Cathrine Fandén was on the 14th of January 1979 and it worked at once. Then they convinced Stephans neighbour Lars Holma to join on bass and on the 23rd of March they had their first concert under the name of Smudge with a repertoire of Three girl rumba (Wire), No heart (The Vibrators), Louie Louie (the Stooges version), Last Orders (The Fall), Sunday Morning Nightmare (Sham 69) and six self penned songs. On the next gig all the covers were gone and the band changed name to Vacum. On the 12th of August the band went to Gävle and during a few hours recorded and mixed six songs for their own Ep and also the track Svartvitt for The Sundsvall Punk Ep. Soon after that Cathrine moved to London to be au pair but Stephan and Mats did not give up and instead convinced another childhood friend Anders Olsson to join in on bass and also found drummer Sank Sankqvist who just got kicked out of Pizzoar.

Just 3 weeks after forming this new entity, the band had their first concert and after that things moved rapidly. The Maskerad single was recorded and made it to single of the week in Expressen (the most important music pages at the time) and when Cathrine came back from London she joined in on vocals since the drum chair was occupied.

The first album was recorded in spring 1980 and during the recording they discovered that Cathrine also could play the piano, and had real talent for it, so soon after the release of the first album a synth was bought and Vacum had found its form. Most of the material was based on ideas of Cathrine that all the others contributed too. The first album opened a lot of doors and the band started touring a lot and the second album was recorded in MNWs studio in Vaxholm. They pride themselves of writing a lot of material which resulted in about 150 songs. The aim was to have a new song on each local gig which resulted in long long rehearsals and to top that a lot of gigs which started to wear the band down.

After the recordings of the second album Den Sista Vintern, Cathrine and Sank left the band and was replaced with Magnus Lindh (who been assisting engineer during the recordings of Den Sista Vintern and had played in Rasta Hunden) on vocals and keyboards and Patrik Högl on drums. Cathrine formed synthpioneers Dockhuset and Sank went to USA to become a drummer for Richard Lloyd and later became a well known producer producing Thåström, Killing Joke and Paradise Lost among others.

The new version of Vacum had a period of long synth based songs which gradually changed to shorter and much more snappy songs and the single Dagar i Morgon was that version of the band at its best. Magnus background as an actor also added to the band resulting in better live shows. The band toured a lot and the third album Flugor och Rosor was recorded at extreme speed.

After the recordings of the third album Stephan moved to Stockholm and Magnus to Karlstad and after a while even Patrik moved to Stockholm and the band that used to rehearse for days suddenly had a problem to get together. The last recording to the compilation album En samling Rock från Sundsvall 1985 shows a band that had lost direction and focus. When a tour was booked in April 1985 Anders suddenly said no. He refused to go on tour unrehearsed and the tour was cancelled. Vacum made their last gig in June 1985. One of their best gigs ever.

The band has been resurrected twice. Both for rock club Pipeline jubilees. 1993 the 1984 version of the band played and in 1998 the original version played. The year after they also recorded one song "Scream" for Massproduktions 20 years jubilee -CD - Were only in it for the Money. "

Information taken from their excellent myspace page. this first record of theirs is a bit too stumbling-punk to be of real interest, but theres some excellent ideas floating around through the whole album and the lyrics is right on the spot sometimes. the only real flaw i can think of is mats hammermans vocals, which isnt very good. but considering this is a real punk record and that it was their first, all in all its an intriguing album well worth a listen or five.
LEGALISERA DÖDEN
Upplagd av Albin kl. söndag, februari 01, 2009 86 kommentarer: