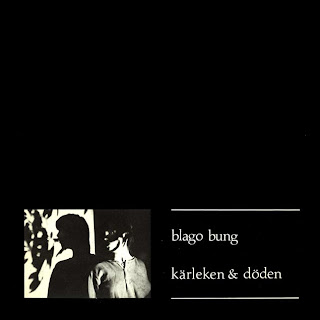 Okay, now were getting serious. Today i am speechless but ill tell you about this anyway. This record were released by Venants Heartwork label based in Lund. Martti LeThargie (or Martti Soutkari, his real name) were an old friend of Henrik and played together in a couple off bands. After a sort of solo offshoot under his own name (single coming soon!) he started Blago Bung together with Jan Fornell and Kamilla Lindström although i guess several others played as they went along, among others one Träfrack (if anyone have some info about this guy id love to hear it. was he even real?). This was their only recording and its one of the best records ever. I bought it directly from the label when i started discovering the swedish new wave and was blown away by the beautiful music. The bass-synths and the quirky, original guitarplaying! This is a total unique effort in the history of music! Just listen to the track Förruttnelsen, a sort of cover but a cover of a poem by swedish author Erik Johan Stagnelius, a grim tale of one mans longing to be cast from this world into the arms of death and decay. And Soldis, about life in the summertime. Maybe some of you will find it to pretentious but thats the beauty of it. Blago Bung also have some songs on compilations wich i will post soon, and they actually recorded another album but due to record labels ignorance it never came out although Heartwork made some of it avaliable on their great weekly mp3 handout on their website. Enough said, for gods sake listen:
HERE
Upplagd av Albin kl. onsdag, januari 02, 2008

Hey there! Great site you've started, congrats! Lookin' forward to many more Swedish punk jewels! Talking punk, you Swedes were (are!) always better than us Danes - way better! - and you had/have tons of f*ckin' great bands, we only had a handful... :-(